Do you develop your team’s strengths? Or their weaknesses? 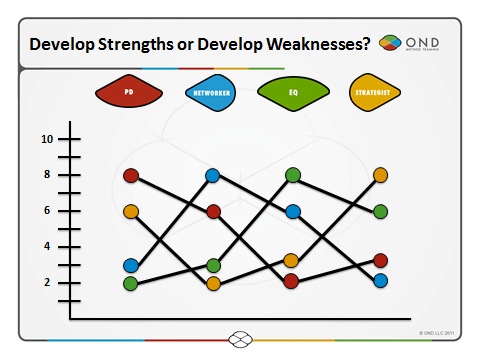 Most of the training offered to businesses is at the fundamental level. Whether it’s communication skills, time management, IT skills, sales training, SAP system, negotiating or people management, the level of training given to employees is invariably either elementary or, at best, intermediate.  It’s rarely advanced. And that’s because it is easier to create basic training courses rather than advanced programmes to take people with a real strength to an even higher level.

Look at the graph above. It describes, in Method Teaming terms, the make-up of a four person team. The red dots are for a person whose primary Intellect is that of a Project Director, or PD. PDs are the makers and doers of the world. They get things right and get them finished. 55% of the planet’s population are PDs. This person scores 8 as a PD, 6 as a Networker (their secondary Intellect), 2 as an EQ (someone with drive and competitiveness) and 3 as a Strategist (ideas and big picture people).

So on with the others.

Notice that all of them score no higher than 8 out of 10 on their primary Intellect. This is normal. Together they make a typical ‘team of eights’.

Most managers, if prescribing a training course for this team, would invariably focus on their weaknesses in order to raise their worst competencies to an acceptable minimum. The vast majority of training courses are geared for this purpose.

But now look at the second graph below. All that has been achieved by focusing on weaknesses is to move the worst competencies from 2 to 3. Or 4 at best. And while some of the team will benefit from any particular course, others in the team, who are already at a higher competence on that subject, will gain nothing. They are still a team of eights. 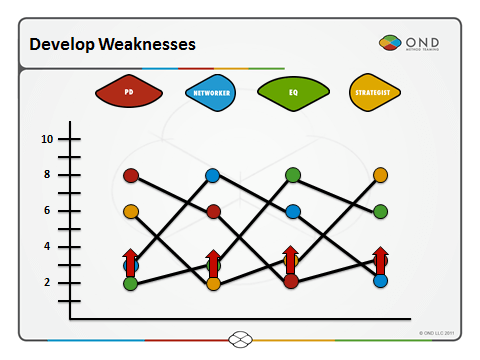 Now see the next chart. If you were the manager of this team and you really wanted it to excel and outperform the equivalent teams in your competitors’ businesses, doesn’t it make sense to focus on their strengths and take these to the next level? 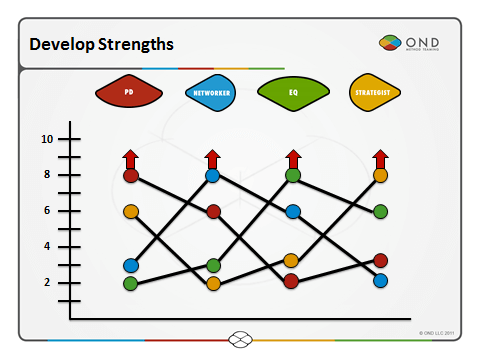 The team is leaving ‘8’ behind and heading upwards. They are aiming for stardom. These employees are on their way to becoming everything they were made to be. They joined your company to grow and develop and the training they’re receiving is taking them where they want to go. They are growing from a team of eights to a team of nines or even tens. They are going to be highly successful in everything they do. And here’s the reason why:

A team of nines, when competing against a team of eights, will not only beat them every time, it will obliterate them. See below. 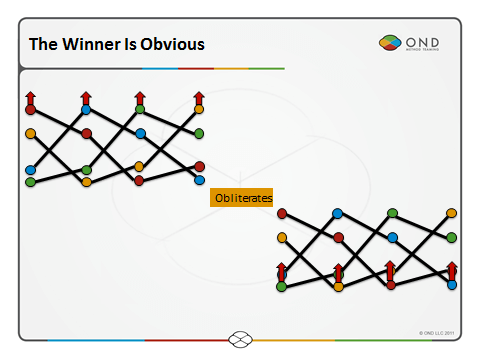 So, hopefully you’re convinced that if you really want your team to win and be the best, you need to coach their strengths, not their weaknesses.

But a new question now arises. How do you know the areas in which your team members’ strengths and weaknesses lie? It’s an important question because, without that knowledge, you can’t possibly make the right decision about which training courses to select for them.

Method Teaming is a science-based methodology which can answer this question for you. And it can do so with unerring accuracy. Method Teaming will plot the natural strengths and talents of your team – or your entire company – and illustrate the enormous wealth of talent available to you. It will show you in graphic detail the astounding potential of the individuals who show up for work with you each day. Then it will show you exactly how to realize that potential. All of it.

And, by the way, not only can you grow ‘teams of nines’ or even ‘teams of tens’ in every part of your business and annihilate your competition in every field of endeavor in which they engage, you’ll also delight your staff. “The field loves Method Teaming,” said Marcel Keller, VP and General Manager of Hewlett Packard Enterprise in September 2016. “And it gives HPE immediate quantifiable sales lift”.

This Christmas and into 2017, why not give your staff something they’ll love too?