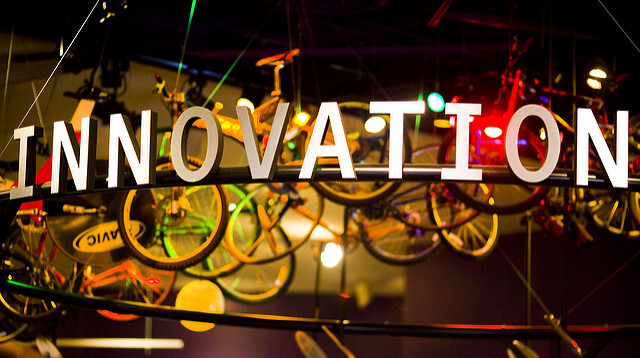 There is a huge team involved in any successful innovation, not just the person with the ideas. You might simply want to improve a product or service. But then there’s the marketing to consider, the selling, the internal communication to ensure everyone’s on board, the finance, the delivery, the aftercare, the billing, the account management and a whole host of other activities that surround the main event.

If you’re not going to have a giant, career-smirching flop, you have to get all of this right.

Nor can you afford to back off and do nothing. Staying ahead of the competition requires constant innovation. If you stand still for too long you get overtaken and drowned as the competitive tide flows in behind you. Innovation isn’t just for hi-tech companies, it’s for everyone.

Sometimes innovation seems to come naturally. It just evolves. This is incremental innovation and it’s seen in lots of little steps that combine to make a big difference. This is relatively painless.

But frequently, incremental innovation isn’t sufficient to capture a big opportunity, or even just stay afloat. It’s too slow. That’s when innovation has to become a project with a major end goal. The goal is usually to make a big change that will take the organization forward by a leap.

Nowadays, most innovation in medium or large corporations is done in teams. A single individual, no matter how brilliant, just doesn’t have the bandwidth to carry out all the tasks needed to bring about a major change. From initial design to finished product there might be dozens of separate inputs required, all of which must be perfect if the new product or process is to succeed.

How do most organizations build innovative teams?

A trawl around the internet brings up a variety of suggestions. One writer highlights the importance of choosing team members with deep experience and a wide network of contacts. Another says that hack days or hackathons challenge employees to pool their energy into new products. There’s no shortage of advice. But most of it is intuitive and reflects one person’s experience of a time and place. And approximately 90% of innovations still fail. Yet there has been no hard science to guide us in the business of innovation.

Enter Method Teaming which is a teaming science that has been pioneered in both large and small businesses. Method Teaming has a branch that is devoted to innovation teams. It reveals that ‘the process of innovation requires the right Intellect to join the team at the right time’. You’ll notice that Intellect has a capital I. It doesn’t mean how intelligent you are, it means how you channel your intelligence.

Case Study:  Recently a $50 Billion US-based networking equipment company implemented a Method Teaming program. The company previously had a corporate culture in which employees were attached to a team only to be moved to another team in a short space of time. It was not uncommon to move teams twice in one year. The product innovation process was especially badly affected as there were so many people moving in and out that new products could not be brought to market. A Method Teaming program was implemented to bring sanity to the situation. It stabilised staff movements, ensuring that the right people were always in the right teams and reduced bad transfers by 80%.

Method Teaming can map the Intellect of everyone in the company and identify exactly the right individuals who should form part of an innovation team. It will even tell you when they are needed and when they are not. It’s so accurate that you can use it to predict the success of the team based on the participation of different individuals. Method Teaming means that for the first time ever you can guarantee successful innovation and take the company forward by a leap.

You can also ensure your career is never smirched.

So, now that you know the facts, when you next need to innovate, are you going to build your team with intuition (historical failure rate: 90%)? Or with Method Teaming science (historical success rate: 99.7%)?

Method Teaming means that for the first time ever you can guarantee successful innovation and take the company forward by a leap.