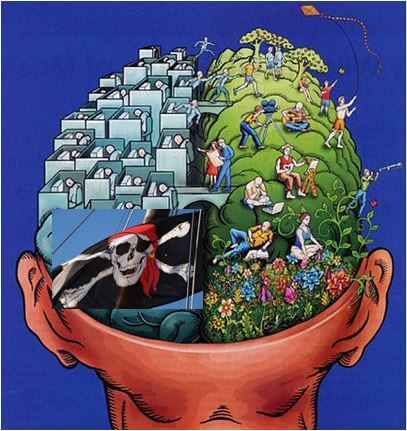 Science has spoken and placed a massive question mark over the prominence given to skills in the career market.

Psychiatrist Iain McGilchrist, in his widely-acclaimed ‘The Master and his Emissary’ discusses the roles of the two brain hemispheres and their relative focuses.

The right hemisphere, he declares, is the master. It is where all unbounded thought takes place and it is the originator of all complex transactions. The left hemisphere on the other hand likes categorisation, analysis and division. It likes to put things in boxes.

In most daily situations the two hemispheres work together. Thoughts arise in the panoramic right hemisphere, are sent to the left (the emissary) for close inspection and then re-presented back to the right for re-insertion into the big picture.

But in the Western world the left hemisphere has changed the rules to suit itself. On many of the big issues of our day it has decided not to pass the ball back to the right hemisphere. Instead it runs off with it like a truculent child and plays its own game by itself.

Talents, which cross multiple disciplines and resist easy definition are the property of the masterly right hemisphere. They are the big play. Talent discovery and alignment is a game for adults.

Skills, which can be taught, described, ring-fenced and tested (as in exams) are the delight of the left hemisphere. They are easy to understand and manage. But the left hemisphere is incapable of describing boundaryless talent and so mistrusts it and tries to diminish its importance.

But herein lies the problem. Skill should be subservient to talent. The emissary should work for its master. But our collective Western left hemispheres have severed the vital Skills-Talents relationship and declared that skills can work without reference to talents. Our left hemispheres have metaphorically run amok, declared independence, mutinied and imprisoned their masters before taking over the palace.

Well, 80% of us hate our jobs according to Deloitte. Discontentment at work is at a high and shows no sign of getting lower. Stress is rampant. Yet most of us based our careers on the skills we learned in school or college. Could there be a connection?

You be the judge.

Humans are clearly supposed to involve the full left-right brain cycle when considering issues that matter. Such as careers and jobs. It’s true that talent is vastly more complex and harder to understand than skill. But it’s surely time to make the effort to restore talent to its rightful place as the senior partner in the relationship and bring the skills-focused left hemisphere to heel.

The emissary must be restrained. Restore the master and put talent before skill. The well-being of millions of workers around the world depends on it.